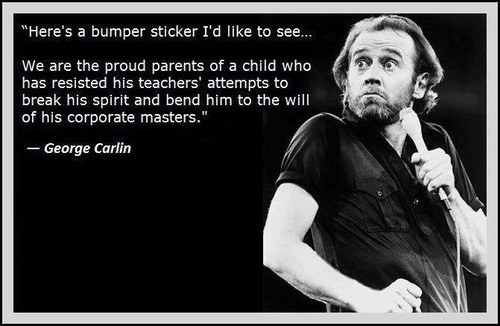 A good comedian understands to speak on heated topics, normally not spoken of in daily conversation, humor can go a long way when the intent is to deliver a deep thought to provoke mind expansion. George Carlin is one of the few comics that come to mind who had the verbal skill to have you laughing one minute and the next moment drop a dark, but insightful message.

Carlin was a comedian who practically defined the word “edgy”.  His material was often political and he was well known for pointing out hypocrisies which earned him the title “Master of Sociological Comedy”.

Some of Carlin’s insights are dark and not easy for the average person to digest, but overall his words surely do pack a punch.

“But when you’re in front of an audience and you make them laugh at a new idea, you’re guiding the whole being for the moment. No one is ever more him/herself than when they really laugh. Their defenses are down. It’s very Zen-like, that moment. They are completely open, completely themselves when that message hits the brain and the laugh begins. That’s when new ideas can be implanted. If a new idea slips in at that moment, it has a chance to grow.”

“If a man smiles all the time, he’s probably selling something that doesn’t work.”

“I don’t like ass kissers, flag wavers or team players. I like people who buck the system. Individualists. I often warn people: “Somewhere along the way, someone is going to tell you: ‘There is no “I” in team.’ What you should tell them is: ‘Maybe not. But there is an “I” in independence, individuality, and integrity.’”

“I do this real moron thing, and it’s called thinking. And apparently I’m not a very good American because I like to form my own opinions.”

“I’m completely in favor of the separation of Church and State. … These two institutions screw us up enough on their own, so both of them together is certain death.”

“May the forces of evil become confused on the way to your house.”

“The most unfair thing about life is the way it ends. I mean, life is tough. It takes up a lot of your time. What do you get at the end of it? A Death! What’s that, a bonus? I think the life cycle is all backwards. You should die first; get it out of the way. Then you live in an old age home. You get kicked out when you’re too young, you get a gold watch, you go to work. You work forty years until you’re young enough to enjoy your retirement. You do drugs, alcohol, you party, you get ready for high school. You go to grade school, you become a kid, you play, you have no responsibilities, you become a little baby, you go back into the womb, you spend your last nine months floating …and you finish off as an orgasm.”

“I like it when a flower or a little tuft of grass grows through a crack in the concrete. It’s so fuckin’ heroic.”

“Religion is like a pair of shoes…..Find one that fits for you, but don’t make me wear your shoes.”

“Never underestimate the power of stupid people in large groups.”

“Religion has actually convinced people that there’s an invisible man living in the sky who watches everything you do, every minute of every day. And the invisible man has a special list of ten things he does not want you to do. And if you do any of these ten things, he has a special place, full of fire and smoke and burning and torture and anguish, where he will send you to live and suffer and burn and choke and scream and cry forever and ever ’til the end of time! But He loves you. He loves you, and He needs money! He always needs money! He’s all-powerful, all-perfect, all-knowing, and all-wise, somehow just can’t handle money!”

“Life gets really simple once you cut out all the bull shit they teach you in school.”

“How come when it’s us, it’s an abortion, and when it’s a chicken, it’s an omelette?”

“Here’s a bumper sticker I’d like to see: “We are the proud parents of a child who’s self-esteem is sufficient that he doesn’t need us promoting his minor scholastic achievements on the back of our car.”

“People who see life as anything more than pure entertainment are missing the point.”

“Never argue with an idiot. They will only bring you down to their level and beat you with experience.”

“Oh Beautiful for smoggy skies, insecticide grain, for strip-mined mountain’s majesty above the asphalt plain. America, America, man sheds his waste on thee, and hides the pines with billboard signs, from sea to oily sea.”

“Everyone smiles in the same language.”

“We are a nation of sheep, and someone else owns the grass.”

“There’s a humorous side to every situation. The challenge is to find it.”

“This is a little prayer dedicated to the separation of church and state. I guess if they are going to force those kids to pray in schools they might as well have a nice prayer like this: Our Father who art in heaven, and to the republic for which it stands, thy kingdom come, one nation indivisible as in heaven, give us this day as we forgive those who so proudly we hail. Crown thy good into temptation but deliver us from the twilight’s last gleaming. Amen and Awomen. ”