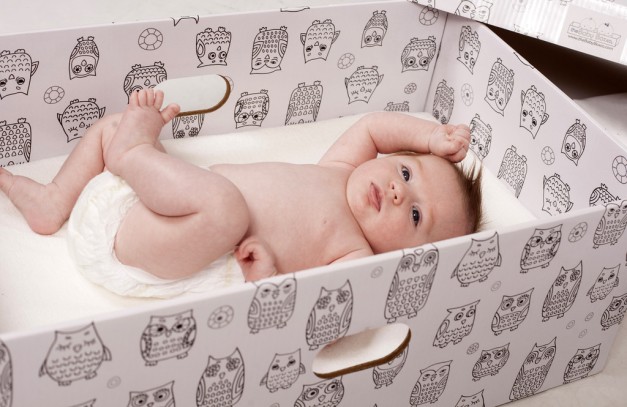 I know what you’re thinking! Why any parent would let their baby sleep in a cardboard box is nuts, but this country’s tradition is far from lacking in purpose. Finland has made “baby in the box” a rite of passage for every child and expecting mother. The reasons are surprising, inspiring and heartwarming.

For 75 years, Finland has been looking after the well-being of its expectant mothers and newborn babies. Even during the hardship of wartime in the 1940s, with country wide shortage in materials and supplies, these baby boxes were still made a nation-wide priority. The unified effort and love of this country’s mothers and children, as well as some inspired creative thinkers, has made Finland amongst the lowest infant mortality rates in the world with only 2 deaths of 1000 live births in 2014. For perspective to my fellow American natives, the United States averaged 6 deaths in 1000 live births this same year. Finland may be onto something big!
When the box was first put in distribution in 1937, Finland was a poor country and infant mortality was high – 65 out of 1,000 babies died, but figures improved rapidly in years to follow. The baby box is a new parent’s starter kit and was offered to low-income families who could otherwise not afford the contents of the box which at the time included cloth to make clothes, sheets, toys and a clean place for baby to sleep in even the poorest of households. It was designed to give children an equal start in life no matter their background or social class. The Finland baby box is a symbol of equality and the importance of all children. 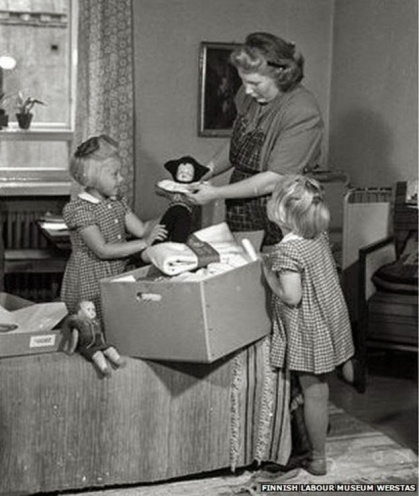 At the turn of the century, changes were made to the box’s contents to promote the country’s preferred parenting choices. Disposable diapers were replaced with cloth diapers due to its favor with environmental protection. Baby bottles were removed to promote breastfeeding which has become one of the main goals of the box. I can already hear the freedom to choose parents scoffing with this last statement, but keep in mind Finland takes care of their mothers and children even more than just this box. To receive a box for their little one, a mother must see a prenatal doctor before 4 months along where they will continue to receive free health care during pregnancy and childbirth. After birth, they will receive free postnatal care for a year and baby will have free doctor care as well, but it doesn’t end there! Mothers also receive 11 months paid leave from work! A few recent studies have concluded that Finnish mothers are some of the happiest in the world. Being an American Mother myself, I can imagine how much this support can help with choosing to breastfeed for a year and the usage cloth diapers.
Recently, the box includes gender friendly bodysuits, a sleeping bag, outdoor gear, bath & grooming products, nappies, bedding, a book to promote a love for reading and a small mattress at the bottom. The choice is given to all mothers to choose the box or to opt out for cash. Roughly 95% of all Finland mothers choose the box. Children from all backgrounds have their first naps in the box to establish this rite of passage by uniting mothers and the generations to come. Even royalty from the UK and Sweden have enjoyed this same box in efforts to promote this world-renowned maternity package.

One thought on “Babies From Finland Sleep in Boxes”